Like many of you, I had a drive that showed up in the “Safely remove hardware” tray icon, and was unable to remove it.

The trick is to subtract 4 from the Capabilities in the registry. Not easy, but it can be done. The only thing is that it keeps coming back after every boot ! And it looks like the value cannot be edited under Vista. Here is how to fix it for good.

What has to be done (but doesn’t work)

Find the drive that shows up in the safely remove hardware icon in your registry. It will be somewhere under HKEY_LOCAL_MACHINE\SYSTEM\CurrentControlSet\Enum\IDE. My DVD drive was here :

There is a numerical an alphanumerical key under that with a DWORD Capabilities value.

You need to have the TCB privileged enabled to modify that registry key. Running regedit as an administrator (or elevated, if you have UAC) will not work. You can fix the value with this command line :

You will have to replace the key name with what you found in your registry. Running psexec -r regedit might work, but who wants to do that every time the computer boots ?

I hardly ever run as an administrator, so putting the above command in a script was out of the question. The solution was to create a Task using Windows Task Scheduler. I set it to run at startup, under the SYSTEM account. Don’t forget the /f (force) flag, or else the job will appear to hang, waiting a confirmation from you.

Create a new task. In the “General” tab, click Change User or Group and enter “SYSTEM” . Trigger on startup and enter the same command as above, but without psexec -s. Your task is running reg.exe, with everything right of that (in the command line, earlier) as optional arguments. 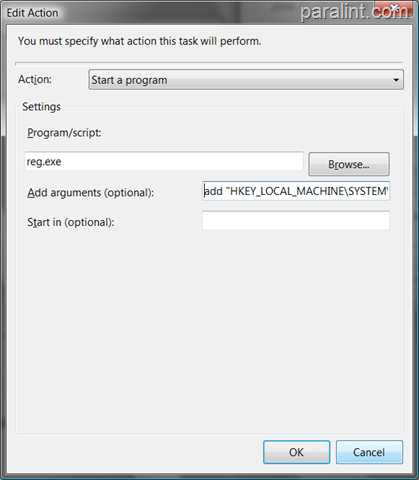